Amanda Pritchett at The Lansdowne

In 1991 Amanda landed her first job at the newly launched Eagle, a rough and ready joint in Farringdon which, with its jumble-sale furniture and great food, would become the template for the new generation of “gastropubs” – a term waiting to be coined. Eagle chef and co-owner David Eyre was impressed with the new girl in the kitchen: “By the time I arrived in the morning she would have knocked up a pissaladiere and several tarts, and a casserole would already be on its way.”

When, a year later, Amanda was ready to set up on her own, she fell upon a large and louche pub in Gloucester Avenue whose warren of booths (rumoured to have hosted strippers on Sundays) had suffered recent fire damage. Just the place for a culinary renaissance. She opened to a rave review in Saturday’s Independent, and arrived at The Lansdowne to find it heaving with would-be Sunday lunchers – far more than she could feed with the four legs of lamb on order from her butcher. Somehow she coped, and over the years has built in a pizza oven and renovated a large, sunny room upstairs to accommodate functions or offer more sedate dining space than the bar downstairs. 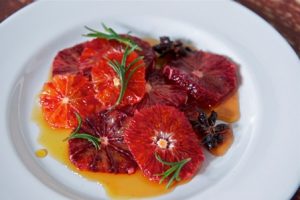 Wise cooks have a large bowl of cold water standing by the stove before they start caramelising sugar. Serves 8

To make the sauce, put sugar in a heavy-bottomed pan and cook over medium heat, stirring occasionally until sugar dissolves. Lower heat and continue cooking and stirring until it’s a deep caramel colour. Remove immediately from the heat and plunge base of the pan into a bowl of cold water to arrest cooking. Leave for a few minutes to cool, then add the measured water and spices and put back over gentle heat to melt. When it is smooth, remove from heat and leave to cool and infuse.

Cut tops and bottoms off the oranges so that they can stand on the board, remove skin and all pith with a downward, slightly curved cut all the way round each one. Slice and plate oranges, spoon some sauce over then scatter a few tips of rosemary sprigs over each plate.